Initial plans are to operate simultaneously with two stations running between 100 and 400 Watts. THE
principle using SSB and RTTY (digital modes). We are planning to use the setup below:
The frequencies suggested below, may be shifted up or down depending on QRM or occupation. We spare no effort to log all stations on request. 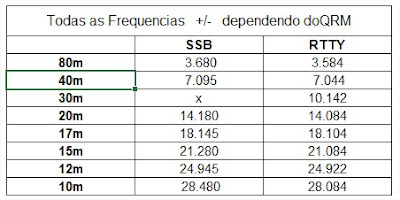 The island of Araujo is the second largest island of Paraty Bay, second in size only to the island Cotton. Its highest peak is 198 meters and has about two kilometers long and one kilometer wide at its widest part. There there is a caiçara community, some still living from fishing, but most working in the vacation homes on the island or as a sailor vessels of the owners of these houses. This community is concentrated near the church of St. Peter, on the beach of Pontal (west side of the island). Virtually the entire east side of the island, overlooking the Bay of Paraty was sold to “outsiders”, where summer homes were built. Being close to the mainland (300 meters in the shortest distance) is the only island of Paraty Bay that has electricity.

To know the island, you can rent a whaling in Praia Grande, another caiçara community, but which is on the mainland ( located ten kilometers from Paraty by Rio-Santos highway).

he main events of the island are the Feast of St. Peter and the Shrimp Festival. The Feast of St. Peter occurs in June, and opens with a procession of fishing boats, decorated with flowers and blue and white flags, leaving the historic center of the pier to the island, carrying the image of the saint patron saint of fishermen. At the party, which takes place in front of St. Peter’s, there is food, dances and typical songs. The Shrimp Festival begins the novena of the feast of St. Peter and is held to commemorate the end of the shrimp fishery closed. In it are served various dishes of caiçara cooking shrimp base, especially the “casadinho shrimp” and the shrimp bobo.

The island has some bars, restaurants, one or two hostels, a shipyard, three flour mills and several beaches, which the best known are: Salvador Moreira, Pontal, Brava and Tapera.

There is a beautiful walk around the island, well marked trail. Starting at the Pontal beach, next to the church, this walk goes through beaches, caves, flour mills and a gazebo with fantastic view of the entire bay of Paraty. One suggestion is to hire a local guide to accompany the walk so he can explain some of caiçara way of life and indicate the best places to meet.

Logbook of The World has Online Status Monitor

Logbook of The World (LoTW) now has a full-time status monitor. The system’s status is displayed in real time and is available offsite, offering a sin... Read more

Got little space at home? Live in a townhouse, apartment or villa? That doesn’t mean you can’t play HF. Watch for ideas on HF antennas in... Read more

2022 saw the return of the Dayton Hamvention and also celebrated the 70th anniversary of the world’s largest ham radio trade show. Ham Radio Out... Read more

FDM-DUO is a SDR tranceiver that offers the possibility to operate STand-alone like traditional radio or attached to a Personal Computer discovering t... Read more

It’s still in beta testing, but FT8 — the latest digital bauble to capture the imagination of the Amateur Radio community — has been luring away many... Read more

uSDX 5 BAND HF TRANSCEIVER – THIS IS NOT A CLONE!

Adding dB Gain to your Transmit Signal. Howe much difference?

CARS HQ to participate in the IARU HF Championship as C4HQ

Transmit Without License During An Emergency? Save Life & Property?